Texas hold 'em is a spin off of the 5 card stud game that became a extremely popular past-time in the early 1900's. The introduction of the community cards and new betting structure has turned this form of poker into the most popular poker variant played in most casinos in the United States. Its no-limit betting form is used in the main event of the World Series of Poker (WSOP), the World Poker Tour, and The Eastern Poker Tour.

To start a new hand two "Blind" bets are put up or "Posted." The player immediately to the left of the dealer puts up or "posts" the small blind of one dollar which is half the minimum bet.The player to the left of the small blind posts the big blind which is equal to the minimum bet. The rest of the players do not put up any money to start the hand. Because the deal rotates around the table, each player will eventually act as the big blind, small blind and dealer.

2) Each Player is Dealt Two Cards:

Each player is dealt two cards face down with the player on the small blind receiving the first card and the player with the dealer button getting the last card. The first betting round begins with the player to the left of the big blind to "Call" the blind bet, or putting at least double the blind to "raise" or folding his hand. The last person to act in this round of betting is the big blind.

After the first betting round is completed, three cards are dealt and turned face up in the middle of the table. This is known as the "Flop." These are community cards used by all the players. Another betting round begins with the first active player to the left of the dealer button. The minimum bet for this round is the big blind

4) The Turn – The Fourth Community Card is Turned Over

When the betting round after the flop is completed, the top card is dealt face down and “burned”, then the dealer turns a fourth card face up in the middle of the table. The minimum bet after the turn is the big blind and begins again with the first active player to the left of the dealer.

5) The River – Turn Over the Fifth Community Card

Following the betting round for the turn, the top card is dealt face down and “burned”, then the dealer will turn a fifth and final card face up. This is called the "river," and the final betting round begins. The minimum bet again is the big blind.

6) The Showdown – Players Turn Over Their Hands to Determine Winner

To determine the winner, the players may use any combination of their two hole cards and the five cards on the "Board" (Table) to form the highest five-card hand. A sixth card is never used to break a tie. If two players tie the pot is split, place uneven amounts in center pot for next hand to be played out.

Hand Rankings from Lowest to Highest 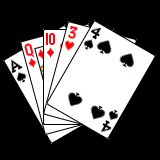 Low Poker Hand
The lowest hand you can get; no pairs, no trips, no nothing. In this case, your highest card (called the Kicker) becomes your only real hope. 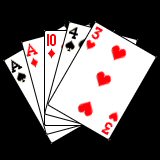 Pair
Two of the same card. 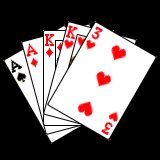 Two Pair
A hand made up of one pair of one rank and a second pair of another rank. 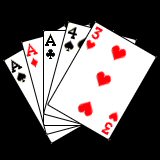 Three of a Kind
Three cards of the same rank, also called Trips. 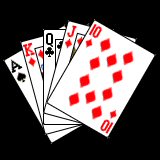 Straight
Five consecutive cards, such as 6789T; when there’s more than one player with a straight, the straight to the higher card wins. 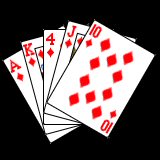 Flush
Five cards of the same suit. When there’s more than one player with a flush, the higher card that is not common to both hands wins. 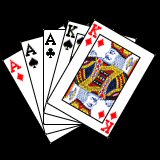 Full House
A hand made of three cards of one rank and two cards of another. 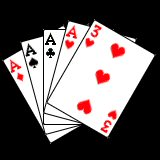 Four of a Kind
Four cards of the same rank, also known as Quads. 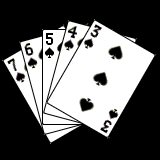 Straight Flush
Five consecutive cards of the same suit. When there’s more than one player with a straight flush, the straight to the higher card wins. 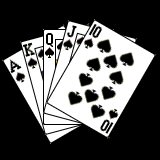 Royal Flush
The highest possible hand, a straight from 10 to Ace in the same suit. Also known as a Royal Straight Flush, or just a Royal.

Ok! Now you are ready for the tournament rules, feel free to print these rules out and bring them with you (it's a lot to take in just reading)