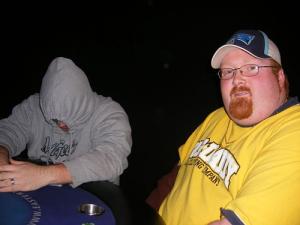 << Back To Big Daddy's Profile

So my Aces were cracked last night.

So my Aces were cracked last night. First time in a while and I am still as yet undecided about whether I made the wrong play or not. It was the 7th or 8th hand of the night which is what hurts the most I think. Typical raises of three times the big blind went out the window right away at my table last night for whatever reason. With the blinds at their initial 100/200 starting point and after watching the first 5 or 6 hands be raised to 1000 and 1200, I picked up pocket Aces in first position. Well I limped counting on the type of substantial raise I had seen every hand thus far and was not happy when 6 people called and the blinds checked. Flop came 4-5-9 with 2 spades and I immediately raised. After a couple of folds I was reraised eliminating the rest of the players still holding cards. Since he limped it is nearly impossible to put him on a hand. Given the flop he could have had almost anything. He could have been on a spade draw, he could have had top pair with a large kicker, he could have had a straight draw. He could have had a set, but if he had a pocket pair I think he would have raised preflop to eliminate as many limpers as possible, so I dismissed the possibility of that hand beating me. I decided that since I am still ahead against all these scenarios, and since I believe the only hand that can call an all in is two pair, I reraised all in. He immediately called and as I expected he had two pair, 4's and 5's. I still don't think I played the hand particularly bad. I am happy I got a refresher on why I don't normally slow play big pairs, and I am happy I got reminded that last night as opposed to Saturday....

What would you do?

I wonder if anyone even looks at these but I am bored so I figured I would post this hand from a few nights ago since everyone I talk to keeps saying 'I couldn't have laid down Q's' or 'I don't think I've ever mucked Q's preflop before' or they keep telling me I made an amazing lay down. Anyways here is the hand. Last hand before Final 16 so you are in the points in case that matters to anyone. You are sitting to the right of the button. Blinds at 400/800 Play folds to you. You raise to 2400 with pockets Queens. Player on the button goes all in and the blinds fold. You are even with him in chips with around 12,000 give or take a couple hundred. What would you do? I folded, even though that had been the first hand I'd seen in almost an hour. I know that phrase gets thrown around a lot too but it is no BS, I couldn't catch 2 cards that even looked semi good together. I also know it depends on who you are laying down to and the feeling you get about the hand but that being said I folded. Anyone, who wasn't there that night, want to guess what he had?

Let me guess.....he had pocket jacks?

<< Back To Big Daddy's Profile